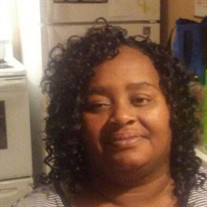 SALISBURY &#8211; Mrs. Vanessa Amy Matthews, age 50, was born to the late Benjamin Matthews, Sr. and Katie Lou Matthews, on July 15, 1970 in Catawba County. On Tuesday, May 25, 2021 she went home to be with the Lord at Wake Forest Baptist Medical... View Obituary & Service Information

The family of Mrs. Vanessa Amy Matthews created this Life Tributes page to make it easy to share your memories.

Send flowers to the Matthews family.