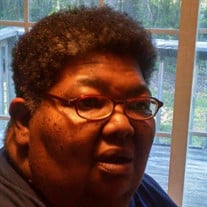 Mrs. Rita Cortez Davis Luther was born to the late Russell L. Davis, Sr., and Annie Hunter Davis on December 19, 1959. God called her home on December, 9, 2018. Rita was formally educated in the Salisbury-Rowan School System and graduated from Salisbury High School in 1978. Rita was known for her bright warm smile, and outgoing personality. She never met a stranger! She enjoyed working with people, which led her to a career in the healthcare field. She worked as a nurse’s assistant at both Magnolia Gardens and The Laurels of Salisbury Nursing Homes. She went on to work many years as a CNA at Rowan Memorial Novant Hospital until health problems prevented her from performing her duties. Rita was a member of Henderson Grove Baptist Church in Salisbury, throughout her early life. After her marriage to James Luther in August of 2000, she became a dedicated and faithful member of Shady Grove Baptist Church in East Spencer, where she willingly served on various auxiliaries. In addition to her parents, she was also preceded in death by her husband, James C. Luther, whom she dearly loved, and nephew Russell L. Davis, III. Those who shall forever cherish her memories are one sister, Crystal Davis of Clarkston, GA; one brother, Russell L. Davis, Jr. (Tina Kelly), of Spencer, NC; nephews and nieces (her heartbeats) Trae’, Xzavier, Khalil, T’sion, Sa’Niyah, Raleigh, and LaSheria. She also leaves behind a number of step-sons, step-daughters, grandchildren, other relatives and close friends. Funeral Arrangement: visitation at 12:30PM followed by service 1PM, Tuesday, December 18, 2018, at Shady Grove Missionary Baptist Church, East Spencer, North Carolina. Interment will follow in the Shady Grove Church Cemetery. The family are accepting friends at Russell Davis residence, 710 Fourth Street, Spencer, North Carolina. Boone-Carroll Funeral Home of Cleveland is assisting the Luther family. Online condolences may be made at boone-carrollfh.com

The family of Mrs. Rita Cortez Luther created this Life Tributes page to make it easy to share your memories.

Send flowers to the Luther family.