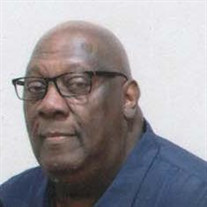 Mr. Richard Demont Caldwell, age 69, of 711 Holt Avenue, Greensboro, North Carolina went home to be with the Lord on, Friday, January 8, 2021. He was born to the late Richard William Caldwell and Nevolia Caldwell on, August 22, 1951. He attended Salisbury High School in Rowan County, North Carolina. He worked for over 20 years at Yates Construction Company. He worked for several years at Livingstone College as a cook. Cooking was his expertise, he also loved to eat good food. His favorite football team was Minnesota Vikings. He loved to watch football. Demont was truly a fair man, and loved his wife and family. He was giving and companionate and had a heart of gold. He was a big man, but his heart was the biggest. He never met a stranger and those that came in contact with him, loved him. He was married to his one and only love for 43 years, Early Mae Caldwell. He was preceded in death by his parents, Richard (Novelia) Caldwell; two sons; a brother, Levi Caldwell; and sister, Betty Lou Watkins. He leaves to cherish his memories; wife, Early Mae Caldwell of the home; one son, Tony Jefferson of Greensboro, North Carolina; two sisters, Willie Beatrice Miller and Eleanor (Walter) Hamilton, both of Salisbury, North Carolina; a brother, Michael Caldwell; eight grandchildren; A host of nieces and nephews whom he loved dearly; special cousin, Doe Holt; favorite “Road. Boone-Carroll Funeral Home is assisting the Caldwell family. Online condolences may be sent to: boone-carrollfh.com. Service is Friday, January 15, 2020, with visitation at 11:30am followed by service 12p.m., at Tower of Power United Holy Church, 601 East Cemetery Street, Salisbury, North Carolina. Due to COVID-19, "EVERYONE MUST WEAR A MASK AND ALLOW SOCIAL DISTANCE, IF YOU ARE NOT LIVING IN THE SAME HOUSEHOLD."

Mr. Richard Demont Caldwell, age 69, of 711 Holt Avenue, Greensboro, North Carolina went home to be with the Lord on, Friday, January 8, 2021. He was born to the late Richard William Caldwell and Nevolia Caldwell on, August 22, 1951. He... View Obituary & Service Information

The family of Mr. Richard Demont Caldwell created this Life Tributes page to make it easy to share your memories.

Send flowers to the Caldwell family.