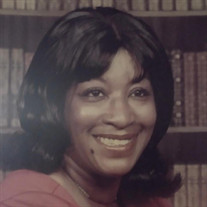 Mrs. Pauline &#8220;Love&#8221; Robbins Rucker, 80, of East Spencer, passed away on the morning of February 21, 2022, at her residence, after a valiant fight against lung cancer. She was surrounded by her family. Pauline was born to Lucille... View Obituary & Service Information

The family of Mrs. Pauline Robbins Rucker created this Life Tributes page to make it easy to share your memories.

Send flowers to the Rucker family.