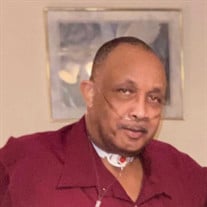 Deacon Michael Wayne Barnes, age 61 of Salisbury, North Carolina, entered into his heavenly home on Saturday, January 9, 2021, at Novant Health Presbyterian Hospital, Charlotte, North Carolina. He was born, June 28, 1959, in Rowan County to Della Mae Barnes of Salisbury, North Carolina and the late Roosevelt Talford of South Carolina. He attended Salisbury High School and obtained his GED from Davidson Community College in Lexington, NC. He met Magdelene Jackson in 1976 and were united in Holy matrimony on February 11, 1995, at the Tower of Power United Holy church. He made a career as an assembler and a roofer during his life time. He accepted Jesus Christ as his savior and received the Holy-Spirit in 2004. He was a faithful member of the Tower of Power United Holy Church in Salisbury, North Carolina under the past leadership of Rev. William D. Turner and Elder Patricia C. Turner Emeritus and current Pastor Anthony Williams. Michael served as a Deacon, Church Building Attendant, Missionary, Outreach Ministry, Soup Kitchen Director, Youth Sunday School Teacher, Men's Prayer Breakfast Ministry, One Child One Church Ministry, and always devoted his time into volunteering at the church to pour into others. He was constantly telling his story/testimony, leading others to Christ. He was a true example of what a newborn creature in Christ is. His love was true, pure and genuine for everyone he encountered. Every word he spoke he walked it himself. Praising and praying for others to God was a duty and a joy to him. Michael was preceded in death by his father Roosevelt Talford; Maternal grandparent, Mrs. Willie Mae Barnes and Mr. John D. Woods; Paternal grandparents, Mr. and Mrs. Albert and Maduree Canty; two brothers, James Barnes and Anthony Barnes. Michael leaves to cherish his memories his mother Della Mae Barnes; wife Magdelene J. Barnes of the home; Siblings, three brothers, Roosevelt Talford, Charlotte, William Barnes, Raleigh and Aaron Barnes, Winston-Salem; one sister Gloria Taylor, Charlotte; three Children, Cora "Doreen" House, Concord, Michael Wayne Jr. and Shameka Jackson of the home; Grandchildren, Janaysia White, Janiya White, and Jeremiah Jackson of the home; Taji Perry, Salisbury, Nasya Walker, Concord, Izeria Wilson, Mooresville, Marley and Mikenna Jackson, Concord, and Makai Jackson(Eden). A host of aunts, uncles, nieces, nephews, cousins, friends, and loyal church members. Funeral Arrangements: Sunday, January 17, 2021, with visitation at 1:30p.m., followed by service at 2p.m. Due to COVID-19, "EVERYONE MUST WEAR A MASK AND ALLOW SOCIAL DISTANCE, IF YOU ARE NOT LIVING IN THE SAME HOUSEHOLD." The body will be available for viewing for the public from 12:30pm to 1:15pm at Tower of Power United Holy Church, 601 East Cemetery, Salisbury, North Carolina. Boone-Carroll Funeral Home is assisting the Barnes family. Online condolences may be sent to: boone-carrollfh.com.

The family of Mr. Michael Wayne Barnes created this Life Tributes page to make it easy to share your memories.

Send flowers to the Barnes family.