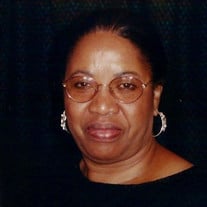 MRS. MARY FRANCES CULBERTSON TAYLOR ROOSEVELT, N.Y. – Mrs. Mary Frances Culbertson Taylor of Roosevelt, N.Y. departed this life on Wednesday, July 29, 2015 at Nassau University Medical Center, East Meadow, New York, after a period of declining health. She was born to the late Marvin and Essie Mae Culbertson in Cleveland, on Aug. 13, 1939, and was the oldest of six children. She was preceded in death by her sister Rosetta C. Askew. Mary attended and supported Mt. Vernon Presbyterian Church. She was a caring and giving person whose life goals included being a good wife and raising her children properly. She enjoyed entertaining, spending time with family and friends, cooking and traveling. Mary was a kind and gentle person who was always there for her family. The kind of person people wanted to get to know, she always knew what to do and say. Mary graduated salutatorian of the 1957 Class at R.A. Clement High School. She earned her undergraduate degree from Barber Scotia College, Concord. She went on to become a home economics teacher at Gustave Straubenmuller Junior High School 22, in the New York City Public School System, (on the Lower Eastside of Manhattan) where she found joy in teaching her many students over the years. She earned her graduate degree from Queens College, Queens, N.Y. and retired from teaching in 2002 after 35 years of dedicated service. Survivors who will cherish forever kind and loving memories include her devoted husband, John Taylor; two loving children, Beverly Taylor of Woodbridge, Va. and Evelyn Taylor Graves (Norman) of Springfield, Va.; four loving stepchildren, Jonathan Taylor of Hempstead, N.Y., Renee Gatling of Roosevelt, N.Y., Leon Taylor of Bullock and Terry Taylor of Inman, S.C.; three wonderful grandchildren, Taylor Graves, Aja Gatling and Anthony Gatling; one sister, Grace Jones (Thomas); three brothers, Walter Culbertson (Shirley), Roman Culbertson (Dorothy) and Marvin L. Culbertson, all of Cleveland; four sisters-in-law, Rose Young of Philadelphia, Pa., Lilly Williams (William), Ida Davis and Bernice Moore (Henry); two brothers-in-law, John W. Taylor (Dossie) and Leon Taylor, both of Wallace; two uncles, Robert Hall and Gary Hall, both of Cleveland; and ahost of nieces, nephews, other relatives and friends. Mary will be greatly missed by her family and friends. We pray that she has found peace, joy and happiness as she has made her journey from this earth. Visitation and Funeral Service: Visitation will be held 12:00 p.m., Thursday, Aug. 6, 2015, followed by funeral service 1:00p.m. at Mt. Vernon Presbyterian Church of Cleveland. Interment will be in the church cemetery. Boone-Carroll Funeral Home is assisting the Taylor family. Online condolences may be sent to www.boone-carrollfh.com.

The family of Mary Frances Culbertson Taylor created this Life Tributes page to make it easy to share your memories.