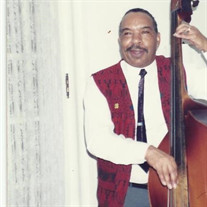 Kenneth Thomas “Buck” Carroll, 76, passed away at Glenn A. Kiser Hospice House on January 17, 2014. He was born on November 16, 1937 in Kings Mountain, North Carolina to the late Thomas Carroll and Beulah Crawford. Ken joined Soldiers Memorial A.M.E. Zion Church at an early age. Kenneth was a 1956 graduate of J.C. Price High School. His educational background includes Bachelor of Science Elementary Education, Winston-Salem State University, Master of Science, Educational Administration, A&T State University, Administration Certification, Cortland State, Cortland, Career Education Pilot Program, Binghamton, NY, Leadership and Counseling, Harpur College, Vestal, NY, Career Education and Counseling, Elmira College, Elmira, NY, Mainstreaming Schools Abnormal Psychology, Livingston College, Counseling Exceptional Children and Youth Certification, A&T State University, Counseling Exceptional Children, Division of Youth Services, Samarkand Manor, Eagle Springs, NC, Special Education Certification, A&T State University. He taught at Piedmont Correctional Institution, Stonewall Jackson Training School, and Bruns Elementary School. He was an assistant principal at Aggrey Memorial Elementary School and was later promoted to principal. Later Kenneth was employed as principal at Christian Columbus Community School, and became the first Afro-American to be employed in Binghamton, New York. Kenneth was an instructor at Rowan Technical College in Industrial Safety and Basic Adult Education/C.E.T. He was a Counselor and Speech Instructor at Barber–Scotia College. Kenneth was known to have an entrepreneurial spirit. He created business opportunities as a motivational speaker, consultant, and story teller. He retired from the Veterans Administration as head of the environmental management department. He is a past president of R.A.M.B.A. Toastmasters, Salisbury International Toastmasters, Yawn Patrol Zone Toastmasters and the National Active and Retired Federal Employees Salisbury Chapter #720. Ken served on numerous committees and boards throughout his life time and they are too many to name. Ken was inducted into J. C. Price Hall of Fame in June of 2012. He served as a board member for Boone-Carroll Funeral Home. We will truly miss his guidance and insight. He served in the United States Army for three years. Ken assisted in organizing the “PCS Trio” musical group, which he enjoyed singing jazz, blues and gospel until he became ill. He touched the lives of many and was sometimes referred to as the “The Bass Player”. His love for education meant that he strongly encouraged others to excel regardless of where they came from or what they considered their limitations to be. It would be impossible for anyone to talk to him about their dreams and not leave him motivated. He loved challenges and I believed that there is not a book or tape in the United States that he has not read or listen to. He leaves to cherish his loving memories: his wife, Annie Boone-Carroll; three sons, Kevin Carroll of New York, Keith (Tacarra) Carroll and Kenneth Carroll, Jr., of Salisbury; 9 grandchildren; one brother, Nathaniel Shipp, Rhode Island; one uncle, James Carroll of Bessemer City; three step-children, Patricia Johnson and Vernon Lee of Ahoskie, NC and Clifton E. Harrell, Jr., of the home that he loved as his own; god daughter, Susie Jackson; cousin, Jimmy Carroll that was like a brother to him; and a host of cousins and other relatives and friends. Acknowledgement The Carroll family wish to thank each of you for your kindness rendered during the lost of our loved one. A special thanks to Glenn Kiser Hospice and Salisbury VA medical staff. May God Bless each of you. The Family Visitation & Services: Tuesday, January 21, 2015, visitation at 11:30 followed by funeral service at 12 Noon, Soldier Memorial A.M.E. Zion Church, Salisbury. Reverend Dr. Grant Harrison, Jr., will conduct the eulogy. Boone-Carroll Funeral Home of Cleveland, North Carolina will be assisting the Carroll family. Online Condolences maybe made at: boone-carrollfh.com.

The family of Kenneth Thomas Carroll created this Life Tributes page to make it easy to share your memories.

Kenneth Thomas “Buck” Carroll, 76, passed away at Glenn A. Kiser...

Send flowers to the Carroll family.