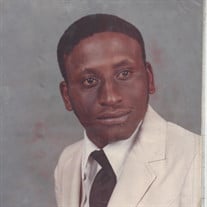 Mr. Jerry L. McDuffie was born to Henry and Dora McDuffie on August 21, 1953 in Columbus County, North Carolina. He went home to be with the Lord on June 16, 2020, at the age of 66, at Novant Rowan Health Medical Center, Salisbury, North Carolina. He attended and graduated from Chadbourne County Schools, in Chadbourne, North Carolina. He joined Presbyterian Church of Chadbourne at an early age. He worked for over 15 years at Forest Wood Company and for Stanley Furniture Company in Lexington, North Carolina. He later joined Erwin Temple CME Church where he song in the Adult and Young Adult Choir. Jerry was a father figure for many of his nieces and nephews. He married Rosia Fisher on August 23, 1987, the love of his life. He was a dedicated and faithful husband. He made sure that his wife Rosia was well taken care of by preparing her meals and making sure she had her medication. She stated, “he actually spoiled her.” He will truly be missed by his wife, family, friends, and neighbors. He was preceded in death by his parents, Henry and Dora McDuffie; a sister, Mary Fairley, and a sister-in-law, Doris Fisher. He leaves to cherish his memories, wife, Rosia McDuffie; two brothers, Henry McDuffie, Jr. (Mary), and Tommy McDuffie; two sisters, Eva Hunter and Gladys Thorton (Robert); a nephew that was like a brother, Curtis McDuffie (Angela); a brother-in-law, Theodore Fisher and a host of nieces, nephews, and other relatives and friends. A private graveside service will be held Wednesday, June 24, 2020, 3p.m., at Erwin Temple CME Church Cemetery, 155 Erwin Temple Church Road, Woodleaf, North Carolina, 28054. Interment will be in the church cemetery. Boone-Carroll Funeral Home of Cleveland, North Carolina is assisting the McDuffie family. Online condolences may be sent to boone-carrollfh.com. Due to the Covid-19, and the safety of everyone, we are asking that the service consist of no more than 50 people and we are asking everyone to wear a mask, if your health will allow you to.

Mr. Jerry L. McDuffie was born to Henry and Dora McDuffie on August 21, 1953 in Columbus County, North Carolina. He went home to be with the Lord on June 16, 2020, at the age of 66, at Novant Rowan Health Medical Center, Salisbury, North Carolina.... View Obituary & Service Information

The family of Mr. Jerry L. McDuffie created this Life Tributes page to make it easy to share your memories.

Mr. Jerry L. McDuffie was born to Henry and Dora McDuffie on...

Send flowers to the McDuffie family.