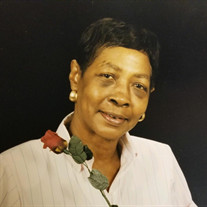 Hilda (“Dumpy” to her Washington family and friends) Brooks was born on January 25, 1932 in Muirkirk, Maryland to the late Sarah and Cleveland Braxton. On Sunday, June 16, 2019, at the age of 87, she passed away in her home in Salisbury. Her early education was obtained in the Prince Georges County, Maryland Public School System. For many years, she was a member of St. Paul’s Baptist Church in Northern Washington, D.C. Hilda’s career included work as a waitress at several Washington Restaurants, including employment at the National Shrine of the Immaculate Conception. She also worked as a care provider for the elderly and disabled. She often spoke lovingly, and humorously, of her relationship with those she cared for. In 1999, she relocated to Salisbury, North Carolina, continuing to work for the elderly and disabled. She was preceded in death by her only child, Jeffrey Correll and nine siblings, Leslie Braxton, Robert Braxton, Curtis Braxton, Cleveland Braxton, Jr., Virginia Freeman, Edith Wolridge, Leola Davis, Mildred Brown, and Renee Marfleet. She is survived by one sibling, Alfred Braxton of Seat Pleasant, Maryland; and many, many niece and nephews. Special mention must be made for her Salisbury family, who was always there for her during her illnesses and hospitalizations. They were there for her in the absence of her family, caring for her needs and showing her honest love. Her family sends their gratitude and a big “THANK YOU.” The visitation will be held 12Noon, Saturday, June 29th, followed by service at 12:30PM, Tower of Power United Holy Church, 601 E. Cemetery Street, Salisbury, North Carolina. Interment will follow in Byers Cemetery, East Spencer, North Carolina. Boone-Carroll Funeral Home of Cleveland, North Carolina is assisting the Brooks family.

The family of Mrs. Hilda Agnes Brooks created this Life Tributes page to make it easy to share your memories.

Hilda (“Dumpy” to her Washington family and friends) Brooks was...

Send flowers to the Brooks family.