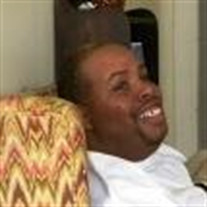 Guanah ReShawn Sockwell The wonderful gift of life was given to Guanah Reshawn Sockwell on the 31st day of March, 1972 in Salisbury, North Carolina to Matress Pulliam and Alfonso Sockwell. He was the first born of three children. Shawn accepted Christ at an early age. Shawn was a loving and caring man who opened his heart to all. He graduated from Salisbury High School 1990. Shawn was a die-hard Atlanta Falcons Fan. He loved family, games, music and fussing with his cousins. Shawn had a smile that was bigger than life and a heart to match. Shawn was called home Thursday, September 28, 2017. He was one of a Very large family. Shawn was in a gospel group with his brother Alexis and three cousins, James, Robert and Justis during his earlier years. This was a group that they would not let his sister Toni join. Growing up he remained in church and he attended Antioch Baptist Church, where Rev. Wyatt baptized him. He song in the children’s choir and the young adults choir. He had perfect attendance in Sunday school at Antioch. Later, he went to Dorsett Chapel where Rev. Ellis was the pastor, and Shawn joined the usher’s board and men’s choir. He also had perfect attendance in Sunday school at Dorsett Chapel. Shawn went to St. Luke Baptist Church where Rev. Heggins was the preacher and he also sung in the men’s choir at St. Luke. His final church home was Fairview Missionary Baptist Church, where Rev. Clarence Marlin is the pastor, and once again Shawn sung in the men’s choir until his health begin to decline. He loved church like he loved his family and friends. He adored his grandmother Doris Greer until she was called home; they were like two peas in a pod. He was preceded in death by his father, Alfonso Sockwell; Beloved grandmother, Doris Hosch Greer and Elenor Sockwell; grandfathers, Charles Greer and McKinley Sockwell; three uncles, Robert Michael Pulliam, McKinley Sockwell and Jerry Savage; one aunt, Dorothy McDaniel’s. He leaves to cherish his loving memories, his mother, Matress (Ricky)Savage; three brothers, Alexis Sockwell of Sarasota, FL, Alfonso Sockwell of and Jarrod Sockwell both of Brooklyn, NY; three sisters, LeTonya (William) Harrison of Salisbury, LaTesha Sockwell and Shajon Sockwell both of Brooklyn, NY; nine aunts, Becky Miree of Salisbury, Sonja Pulliam (Randy) Walker and Cynthia Phillips both Greensboro, Jennifer Sparks Sockwell of Brooklyn, NY, Gean Pulliam of Salisbury, Carolyn Savage of St. Thomas Virgil Island, Diane Davis Savage and Rebecca Savage both of Rocky Mount, Madison Sockwell; five uncles, Theodis Phillips and Michael Phillips both of Greensboro, Kenny Savage and Elmore Savage both of Rocky Mount, and Ted Savage of Raleigh; a great uncle, James Horsh, Sr. of Mocksville; one great Aunt, Fannie Coan of South Carolina; a host of nieces, nephews, cousins and friends. Arrangements: Wednesday, October 4, 2017, with visitation at 12:30p.m., followed by funeral at 1p.m., at Fairview Missionary Baptist Church. Interment will be in the Rowan Memorial Park Cemetery. Boone-Carroll Funeral Home of Cleveland, North Carolina is assisting the Sockwell family. Online condolences may be made at boone-carrollfh.com.

Guanah ReShawn Sockwell The wonderful gift of life was given to Guanah Reshawn Sockwell on the 31st day of March, 1972 in Salisbury, North Carolina to Matress Pulliam and Alfonso Sockwell. He was the... View Obituary & Service Information

The family of Mr. Guanah ReShawn Sockwell created this Life Tributes page to make it easy to share your memories.

Guanah ReShawn Sockwell
The wonderful gift of life was given...

Send flowers to the Sockwell family.