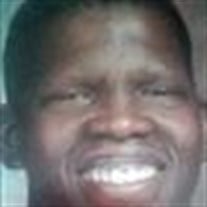 Morganton-Mr. Freddie Charles Thompson, Jr., 21, of 419 1/2 W. Concord Street, Morganton, North Carolina, passed away on Sunday, August 10, 2014 at his residence. (This is a combined Obituary of Mother and Son) Barbara Ann Johnson was born, July 30, 1960, in Morganton, North Carolina. She lived in Morganton, North with her son Freddie Thompson, Jr.. Barbara Ann worked at Southern Devices, Inc., after graduating from Freedom High School. She then transferred to Leviton Southern Devices in Atlanta, Georgia, where she worked for twenty-nine years before becoming disable. After leaving Leviton, she moved to Philadelphia, Pennsylvania for three years. She became a member of Good Samaritan Baptist Church, where she sung in the choir. She them decided to come back to her hometown of Morganton to be closer to her family and friends. While living in Morganton, she attended Logan Memorial First Baptist Church. Barbara Ann was the daughter of Henry B. Johnson Sr. of Baltimore Maryland and the late Ella Mae Booker Johnson of Morganton. She was the mother of one son, Freddie Charles Thompson, Jr., who joined her to be with the Lord on August 8, 2014. Freddie , 21, was born on January 15, 1993 in Fulton, Georgia. Freddie graduated in 2014 from North Liberty School in Morganton. He was an active member of the Boys Scouts of American and loved playing basketball and listening to music in his spare time. Freddie was also a member of Good Samaritan Baptist Church in Philadelphia and attended Logan Memorial First Baptist Church while residing in Morganton with his mother. Barbara Ann and Freddie were both known and loved by the community and will be greatly missed. Surviving are: Freddie’s father, Freddie Thompson, Sr.; Barbara Ann’s siblings (Freddie’s aunt and uncles), Herman Johnson, Henry Johnson, Karen Johnson (George), Deborah Johnson and Adrian Avery, all of Morganton; Renee Johnson Satterfield (Collis) of Baltimore, Maryland and Angie Blackwell (Terry) of Eden; stepmother, Fannie Johnson of Baltimore, Maryland; aunts, Thelma Tate (Charles, Sr.), of Morganton, Dorothy Booker of Philadelphia, Pennsylvania, Lula James of Baltimore, Maryland, Peggy Johnson of Morven; Uncle, Danny Johnson of Morven; grandmother, Annie Bell Johnson of Morven and a host of nieces, nephews, cousins, relatives and friends. Funeral arrangements are Saturday, August 23, 2014, visitation at 1PM followed by service at 2PM, at Gaston Chapel A.M.E. Church, Morganton, North Carolina. Interment will be at Olive Hill Cemetery, Morganton, North Carolina. Boone-Carroll Funeral Home of Cleveland, North Carolina is assisting the Johnson family. Online condolences may be made at boone-carrollfh.com. Family and friends will meet at Mrs. Karen Johnson residence, 1182 Oak Hill Drive, Morganton, North Carolina.

The family of Freddie Charles Thompson created this Life Tributes page to make it easy to share your memories.

Send flowers to the Thompson family.