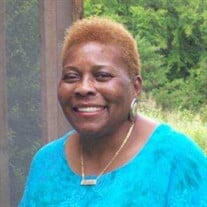 Mrs. Frances Elaine McRae, daughter of the late Alma J. Barber and Thomas James McRae, was born April 6, 1947 in Rowan County, North Carolina. She departed this life on Friday, March 19, 2021 at Iredell Memorial Hospital. She was educated in the Rowan County Public Schools and graduated from Dunbar High School in 1965. Upon graduation, she moved to Brooklyn, New York. She was employed at Brooklyn Developmental Center as a Ward Supervisor. Her duty consisted of caring for the developmentally disabled. She was also a New York real estate agent. She later moved to Tulsa, OK and continued working with the developmentally disabled as an employee of the Oklahoma Development Center. She continued her education by attending the Oklahoma State University where she received an AAS degree in Automotive Engineering. After returning to North Carolina, she became an entrepreneur as an insurance broker and established Carrier Insurance. She also went on to get her Chaplain’s license from a Charlotte institution. Her relationship to Christ was important to her, so she sought a church where her spirit could be nourished. Consequently, she became a member of Higher Dimension Evangelistic Center in Tulsa, OK. Frances loved the Lord and she also loved singing. After returning home, she initially joined Warrior’s Outreach. This is where she used her gift of songs and became the leader of the praise team. She later became a member of Cornerstone Church. She was a kind, compassionate, and generous person as well as a devoted friend. Once you became her friend, you were her friend for life. She was a free spirit, with a life filled with grace and one who was not afraid of a challenge. She had a life full of accomplishments even while she suffered with years of health issues. To know her was to love her. She was preceded in death by 9 siblings. She leaves to cherish her loving memories, two sons, Philip McRae of the home, Mario Fernandors of Washington, DC; one daughter, Patty Braswell-Isler (Dennis) of Durham, North Carolina; four grandchildren; Fe’nyx, Kahmarri, Ez’rah and Jermiah Fernandors; one sister Rev. Martha Pryor of Gastonia; a special nephew Wendall Mack (Keia) of Charlotte, North Carolina; goddaughter, Tammy Long; and a host of nieces, nephews and friends. Funeral arrangements are Saturday, March 27, 2021, at 10am, Cornerstone Church, 513 Webb Road, Salisbury, North Carolina. Boone-Carroll Funeral Home of Cleveland, North Carolina is assisting the McRae family.

The family of Mrs. Frances Elaine McRae created this Life Tributes page to make it easy to share your memories.

Send flowers to the McRae family.