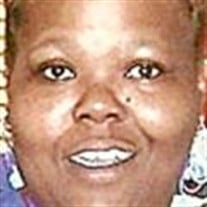 Brandy Nicole Smith,40, my bundle of joy, passed away Tuesday- January 14, 2014 at Fryer Hospital in Hickory, North Carolina. Brandy was born in Brooklyn, New York, September 3, 1973, to Sister Flora Smith (formerly of North Carolina.) She attended, was confirmed. and graduated from the Private Catholic School in Brooklyn, New York. Brandy received an associate degree in Business Management from ITT College in Brooklyn, New York. She moved to North Carolina and received a BA degree in Business Management from Catawba College. Returning to New York. Brandy was employed by the Brooklyn, New York Postal Service. A determined young woman, Brandy touched the lives of so many, and shared her love with God, family, and friends .. . young and old alike. To those who knew her, she was full ~ life, joyful and hilariously comical. God gave her to the world and in her passing, she leaves to cherish her sweet memories: her mother, Sister Flora Smith, sister and brother twins, Genevieve and William Smith (who she helped raise), her aunts Alice, Peggy, and Mary, her first cousin Lisa Cherry; her cousin and best friend, Nikki Smith, her god daughter, Destiny and a host of cousins to include Alex, Tony,

The family of Brandy Nicole Smith created this Life Tributes page to make it easy to share your memories.

Brandy Nicole Smith,40, my bundle of joy,
passed away Tuesday-...

Send flowers to the Smith family.