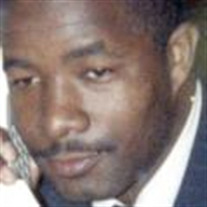 SALISBURY - Anthony Louis Barnes, 49, of Salisbury, passed away, Sunday, October 28, 2012, at Carolinas Medical Center-NorthEast, Concord, North Carolina. Anthony Louis Barnes was born April 6, 1963, in Salisbury, North Carolina. He was the son of Della May Barnes and Arthur Louis Wilder, Sr. He was Educated in Rowan-Salisbury School System and graduated from Salisbury High School. He worked for Cheerwine Company for several years. He was a member of United House of Prayer for All People. He will be especially remembered for his hard work and dedication. He was a very respected person by his children and others. He leaves behind to cherish his memory: mother, Della May Barnes (Harold) of Salisbury; father, Arthur Louis Wilder Sr., of Salisbury; a son, Antonio Lamont Jackson (Shannon) of Winston-Salem; two daughters, Angela Jackson of Salisbury, and Unique Barnes of Spencer; four brothers, Micheal (Maggie) Barnes and Timmy Barnes both of Salisbury, Aaron Barnes of Winston-Salem, and Arthur Louis Wilder Jr., of Salisbury; two sisters, Diane of Kannapolis and Tonya of Salisbury; five grandchildren; and a host of nieces, nephews, cousins and friends. Viewing and Service: Viewing is Saturday at 1:30 p.m. at Boone-Carroll Funeral Home, Cleveland, North Carolina, service follows at 3:30 p.m. at United House of Prayer For All People, 501 Old Concord Road, Salisbury. A meal will be served in the church fellowship hall following the service. The family will meet at the home of mother, Della Barnes, 711 S. Martin Luther King Jr., Ave., Apt. 40J, Salisbury, or the home of daughter, Angela Jackson, 1030 Celebration Drive, Salisbury. Memorials: Donations may be made to Boone-Carroll Funeral Home, P.O. Box 208, Cleveland, NC 27013. Boone-Carroll Funeral Home in Cleveland is assisting the Barnes family. Online condolences may be made at www.boone-carrollfh.com

The family of Anthony Barnes created this Life Tributes page to make it easy to share your memories.

Send flowers to the Barnes family.